An emerging and important secular trend

I've mentioned the demand for money countless times in the 10-yr history of this blog, because it's a very important macro variable. The Fed controls the supply of money, but the demand for money is a function of a variety of factors, some of which are beyond the Fed's ability to control. The secret to any central bank's ability to deliver low and stable inflation is to keep the supply and demand for money in balance. For, as Milton Friedman taught us, inflation is always and everywhere a monetary phenomenon, and inflation results from an excess of money relative to the demand for it. It's that simple. Unfortunately, you don't see many people, including the Fed, talk about this. That's one of the things this blog brings to the table.

For the first 9 of the 10 years I've been following it, the demand for money (which I define as the M2 money supply divided by nominal GDP) was in a secular uptrend: M2 growth exceeded nominal GDP growth. During this same period, inflation remained low and relatively stable. I interpreted this to mean that the world was in effect "hoarding" money, and that hoarding, in turn, was being driven by risk aversion and a general preference for caution and safety, leftovers from the monstrous shock to confidence that the Great Recession produced. Moreover, I thought the Fed was correctly responding to this money hoarding by rapidly and dramatically expanding the supply of bank reserves. You won't hear this same story from many others either.

Towards the end of the Great Recession, the Fed adopted a radically new monetary policy which they dubbed Quantitative Easing (QE). Most people erroneously believed, and still believe, that the objective of QE was to stimulate the economy by printing money and otherwise making money cheap (i.e., by keeping interest rates low). I have argued in numerous posts that this was most definitely NOT the case. The purpose of QE was to accommodate the market's seemingly-insatiable demand for risk-free, liquid assets.

Think of it this way: in the wake of the near-collapse of the global financial system, the world was desperate to acquire more T-bills, the gold standard for cash/money/safety. The demand for T-bills was so extreme that there were not enough in supply. Without enough safe liquidity to satisfy the demand for such, the financial system was in serious danger of imploding. The Fed solved this problem by buying trillions of dollars of notes and bonds and paying for them with bank reserves, which they also announced would for the first time ever begin to pay a risk-free rate of interest. Bank reserves, crucially, are not "money" that can be spent like dollars can. The banking system was happy to use strong inflows of savings deposits to invest in and hold all these new bank reserves, which had suddenly become a valuable asset, being risk-free and interest-bearing (just like T-bills). Banks were risk-averse too. In the end there was no "money-printing."

QE essentially amounted to the Fed transmogrifying notes and bonds into T-bill substitutes. And it worked. Now that the crisis of confidence has finally passed, the Fed can safely reverse the QE process, because the demand for money is declining. There is nothing mysterious or sinister about this. In fact, if the Fed does NOT reverse QE, they would run the serious risk of allowing there to be too much money relative to the demand for it, and that would lead to a destabilization/devaluation of the dollar and an unwanted rise in inflation. Especially today, when all the evidence points to rising confidence, more optimism, and more risk-taking appetite. The demand for money is declining, and that fully justifies higher interest rates and a reduction in the Fed's balance sheet. Expect interest rates to continue to rise across the yield curve.

Beginning about one year ago, the demand for money appears to have peaked, and it has since fallen by 1.9%. I take this as evidence that risk aversion and caution are giving way to risk-seeking. If I'm right, and this trend continues, this has profound implications for future economic growth and the conduct of monetary policy.

What this means in practice is that measures of "money," the classic being the M2 money supply, are likely to grow at a slower pace than nominal GDP for the foreseeable future. One dollar of money supply will be associated with an increase in total nominal output (and national income) of greater than one dollar. Put another way, a given amount of money will support a larger economy, as the velocity of money (the inverse of money demand) increases. The only way that people can reduce their holdings of money relative to other things is to spend it on something else, or invest it, such that the volume of transactions (akin to GDP) grows. Interest rates will continue to rise, and the economy will continue to grow, and inflation may rise as well, depending on how the Fed manages monetary policy. Many people will mistakenly worry that higher interest rates will kill the economy; they will be wrong, because higher interest rates will be a by-product of a stronger economy, more confidence, and more investment.

As always, here are charts that provide the evidence for my story: 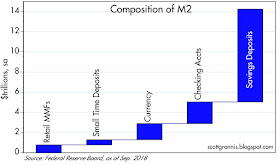 The M2 measure of money supply is generally considered to be the best measure of "money." As Chart #1 shows, M2 consists of currency, checking accounts, bank savings deposits, and retail money market funds. The largest component by far is bank savings deposits, which grew from $4 trillion at the end of 2008 to now $9.2 trillion. This is significant, because until recently bank savings deposits paid almost nothing in the way of interest. Yet people were happy to hold them because they offered safety and liquidity. The demand for this type of money was very strong, and that is evidence of the world's strong desire for safety in the wake of the Great Recession. 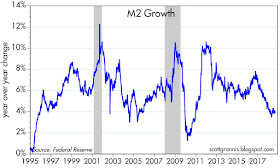 As Chart #2 shows, the growth rate of M2 has slowed significantly in the past year or so. 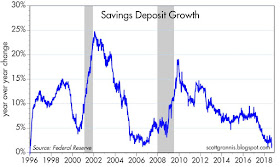 As Chart #3 shows, the main reason for the big slowdown in M2 growth is a big slowdown in its main component, savings deposits. This, despite the fact that banks have been increasing—albeit slowly—the interest rate they pay on deposits. Conclusion: the demand for safety has declined meaningfully in the past year or so. 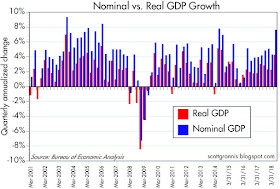 As Chart #4 shows, the growth rate of nominal GDP (shown in the blue bars) has picked up quite a bit in the past few years, even as the growth of money has declined. 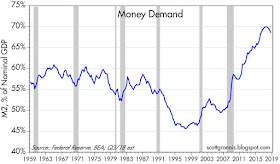 Chart #5 is the main exhibit. This shows the ratio of M2 to nominal GDP. To understand this chart, think of M2 as a proxy for the amount of cash (or equivalents) that the average person, company, or investor wants to hold at any given time. Think of GDP as a proxy for the average person's annual income. The ratio of the two is therefore a proxy for the percentage of the average person's or corporation's annual income that is desired to be held in safe and relatively liquid form (i.e., cash or cash equivalents). In times of uncertainty, it stands to reason that most people would want to hold more of their assets in cash, and in times of optimism they would want to hold less.

I believe that, beginning one year or so ago, the dominant narrative switched from one in which people were willing to pay up for safety and liquidity (by accumulating cash) to now one in which the average person (or company, or investment manager) wants to reduce their holdings of "money" in favor of increasing their holdings of risky assets or just spending it. (Note: I have estimated the ratio for the current quarter by assuming a 6.5% annualized rate of growth for GDP and a 3.5% annualized rate of growth for M2, both in line with recent experience and other estimates.)

The demand for money was extremely strong beginning with the Great Recession (2007), and it reached an all-time high a year or so ago. If it reverts to the levels which prevailed from 1959 through 1990, there is the potential for declining money demand (and increased risk-seeking) to generate potentially an extra $4 trillion of nominal GDP as people direct a greater portion of their income to expenditures and/or investments. 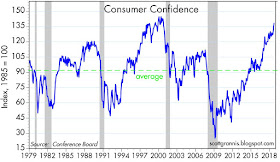 As Chart #6 shows, consumer confidence has surged since November 2016. With increased optimism naturally comes a reduced desire to accumulate cash, and an increased desire to spend money and/or invest it. There is every reason to believe that the demand for money will continue to decline.

This all has very important implications for the Fed, because the Fed will need to take actions to offset the decline in the demand for money, or else it will risk igniting an unwanted increase in inflation. The Fed will need to raise short-term interest rates, and probably by more than the market currently expects (higher short-term rates have the effect of making savings deposits more attractive). The Fed will also need to continue to reduce the size of its balance sheet in order to reduce the supply of bank reserves as banks' demand for those reserves declines. This may cause the market consternation, but it will be exactly what is needed to ensure continued low and stable inflation and in turn a strong economy.
Scott Grannis at 5:11 PM