As I've been pointing out for over two years, rapid growth in the M2 money supply is a big deal, and one that has not received much attention, if any. At first (i.e., mid- to late 2020) it was OK, because the public felt comfortable holding on to large amounts of cash in their bank deposit and savings accounts at a time of great Covid-related uncertainty and economy-wide lockdowns. But starting early last year, when the worst of the Covid panic was subsiding and life was beginning to get back to normal, people began spending that money. Soon, a flood of spending collided with supply shortages and a still-crippled economy, and the result was higher prices. By the end of last year, inflation was galloping towards 10% or so, but the Fed ignored it, asserting it was merely "transitory." It wasn't until March of this year that the Fed began to get worried. True to form (unfortunately), the Fed was—once again!—late to the inflation party, and they have been trying to catch up ever since. As we now know, they embarked on an impressive series of rate hikes which took short-term rates from 0.25% last March to now 4.5%. That marked the most aggressive monetary tightening in history.

Last week the Fed reiterated its intention to snuff out inflation with still more hikes. Sadly, they are now overstaying their welcome at the inflation party, because we know that inflation peaked many months ago. Unfortunately they didn't get my memo on the subject.

The market is rightly concerned to be worried by all of this.

Over the past six months or so, it has become quite clear that higher interest rates have served to bolster the demand for money. No longer are people trying to aggressively spend down their bank balances, because now they can earn a decent rate of interest on their cash. Put another way, the Fed has raised interest rates by enough to once again bring money supply and demand back into balance. It's also the case that supply chain problems have all but dried up. We know all of this because sensitive prices (e.g., housing prices, commodity prices, the value of the dollar and the price of gold) have fallen. Money demand looks to be much more closely aligned with money supply these days.

In the housing market it's beginning to look like interest rates are too high, in fact, as the following charts illustrate.
Economics is all about scarcity and incentives. Higher interest rates give people an incentive to hold on to cash rather than spend it, and they give people less incentive to buy and hold on to things like housing. To judge from falling home prices and collapsing home sales and residential construction, higher interest rates have REALLY had a significant impact on the demand for money. Any higher and we'll have a recession on our hands—and that is exactly what worries the equity market these days.
Chart #1 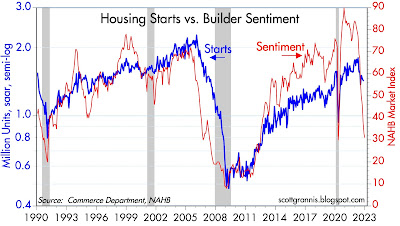 Chart #1 compares the level of housing starts (blue line) with an index of homebuilders' sentiment. Not surprisingly, sentiment tends to precede starts. The more optimistic builders are about the housing market, the more likely they are to embark on new construction. The recent collapse of sentiment thus portends a dramatic decline in housing starts.
Chart #2 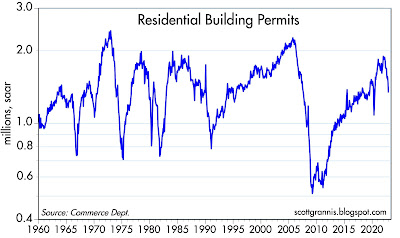 Chart #2 shows the number of residential building permits, which recently have begun to decline markedly as Chart #1 predicted. Look for further weakness in all these numbers.
Chart #3 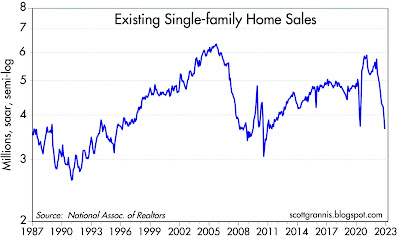 Chart # shows the number of single family home sales, which have collapsed in recent months. A plunge in sales is one of the reasons homebuilders are much less optimistic.
Chart #4 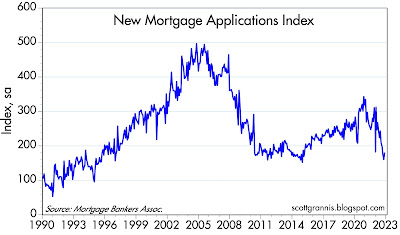 Chart #4 shows an index of the number of new mortgage applications (first-time buyers seeking a mortgage to purchase a home). This also has plunged, down by over 40% so far this year.
Chart #5 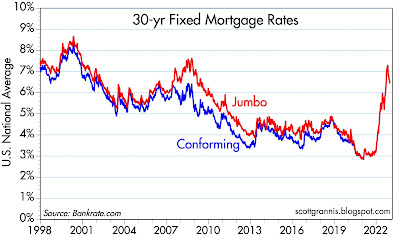 Chart #5 shows the reason why all this is happening: 30-yr fixed mortgage rates have more than doubled in the past year. Never before has a shock of this magnitude occurred in the housing market. Higher mortgage rates on top of rising home prices have increased the cost of home ownership by an order of magnitude. And why have rates soared? Because the Fed has jacked up interest rates by several orders of magnitude and this has pushed up interest rates across the yield curve. Soaring interest rates have crushed the bond market and this in turn has led to many investors scrambling to hedge themselves against further rate hikes. No one wants to own 30-yr mortgage paper if rates rise further, because that means refinancings will grind to a halt and that paper will acquire a significant amount of duration risk: the value of a fixed rate mortgage will decline by more than about 10% for every 1 percentage point increase in mortgage rates.
As a result, the spread between mortgage rates and 10-yr Treasury yields has widened to just about its widest point ever, over 300 bps. Everything is working against the housing market.
Does the Fed really want to crush the housing market by hiking rates further? I think they will come to their senses pretty quickly and back off of their recently-announced tightening pledge. The demand for money is soaring and that means inflation will continue to decline. Nobody needs higher rates right now.
Scott Grannis at 3:02 PM