The US has experienced very little warming since 2005

This post digresses from economics to dabble in the issue of "climate change." If, like me, you have read enough about the difficulties of measuring global temperatures to know that virtually all temperature datasets are and have been extensively "adjusted" after the fact to correct for a variety of factors, then you should welcome the news that our own NOAA (National Oceanic and Atmospheric Administration) has come up with a way to measure temperatures in the contiguous US that, beginning in 2005, generates data that require no adjustments, thanks to strategically placed and well thought-out monitoring stations. Here's a HT to James Taylor, who notes that:

The USCRN has eliminated the need to rely on, and adjust the data from, outdated temperature stations.


What this new data show is that in the contiguous 48 states there has been a statistically insignificant amount of warming over the past 14 ½ years. Using NOAA's data, I created the following chart: 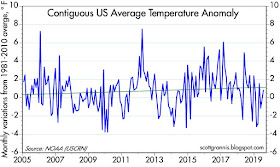 My intuition tells me that if US temperatures have barely increased at all over almost 15 years, then it is unlikely that global temperatures have increased by much more, if at all. After all, air does circulate around the globe. Climate skeptics have here one justification for being skeptical of those who warn that man-made global warming is an existential threat.