This story is actually a few days old, but only today did I stumble upon it. It's the biggest move in major asset prices in at least several weeks, and could be an optimistic portent of better things to come. At the very least it bears watching: 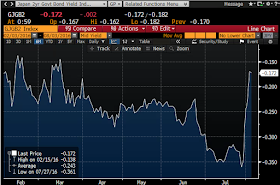 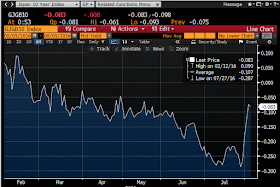 The top chart tracks the yield on Japanese 2-yr bonds, and the bottom chart tracks the yield on 10-yr Japanese bonds. Both have surged some 20 bps in the past few days, and are now only slightly below zero after being meaningfully negative. The ostensible reason for this big selloff in bonds is disappointment over the BoJ's reluctance to pursue further monetary easing measures. The yen rose about 4% as yields rose, but is no stronger today than it was several weeks ago. Meanwhile, Japanese stocks are down only marginally. The only thing that has really changed significantly is yields—which are much less negative now than they were last week.

As the chart above shows, the Nikkei and the yen have been moving inversely for quite a few years—a weaker yen being good for stocks and vice versa. So this latest non-move by the BoJ presumably makes the yen stronger (because of less monetary ease) and stocks weaker (because presumably the economy needs monetary boosting help which is apparently not forthcoming). I've never been a fan of negative interest rates, so I'm happy to see the BoJ become more realistic, and I can't see why that should be a big negative for the economy or for the stock market. The only point of forcing interest rates below zero is to weaken the demand for one's currency, and that can have negative consequences (to coin a phrase) which can destroy confidence. Scaring people into spending money hardly seems better than encouraging them to invest.

This is just one more illustration of the fact that monetary policy does not have magical powers to boost growth; at best monetary policy can facilitate growth if it moves from being too tight to just right. Fiscal policy, both here and in Japan, is what's needed in order to really boost growth and prosperity. Most major economies these days are saddled with burdensome government. If the BoJ has now decided it won't pursue extreme easing measures, that doesn't overly concern me. If the government follows through on this action by adopting genuine stimulus measures which encourage people to take on more risk and hold less money, then we could see a return to rising equity prices, higher interest rates, and perhaps a weaker yen.

For that matter, higher interest rates in all major economies would be a sign of a return to healthier economic conditions, and something to cheer.
Scott Grannis at 3:33 PM