We enjoyed a great trip to Alaska this past week, during which time I didn't have much time to follow events (very slow and spotty internet access, plus too many other interesting things to do and see). To get back into the swing of things, I'll just review a bunch of updated charts—in no particular order—that I've been following over the years: 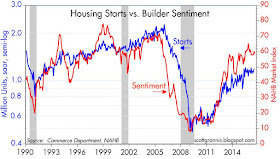 The latest data from the housing market shows activity has been rather flat for the past year. Starts are still significantly below what might be considered "normal," but builder sentiment suggests there is room for improvement. Indeed, starts would need to rise significantly over the next several years just to keep up with scrappage and the ongoing rise in housing formations and population. 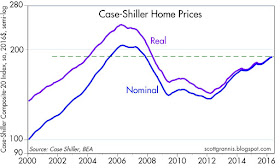 Housing prices, according to Case Shiller, are still well below their "bubble" highs in real terms. Meanwhile, mortgage rates are at historically low levels. Both suggest that there is lots of room for further growth. 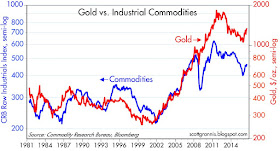 Both gold and industrial commodities have enjoyed a nice bounce since the end of last year. It's notable that the bounce in commodities has occurred even though the dollar has been relatively stable—usually it take dollar weakness to produce a healthy bounce in commodity prices. I'll chalk up the latest move in commodities to what appears to be a firming in global demand—a promising development given the doom and gloom which still pervades most markets (e.g., extremely low sovereign yields). 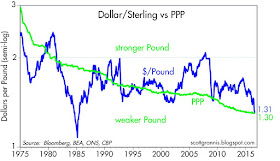 Sterling is the currency that has weakened the most of late, driven in large part by the perception that a "Brexit" will be a negative for the economy. I think it will work to the UK's advantage over time, but for now it just creates a lot of uncertainty. In any event, as the chart above shows, by my calculations the pound today is trading right around "fair value" vis a vis the dollar, after being quite strong for many years. If/when the UK adopts better trade agreements (freer trade), the pound has room to rise. But for now it's reasonably priced. Great time to take a vacation in the UK!
' 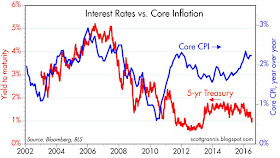 Beginning in early 2011, Treasury yields began diverging from core inflation. The significant gap between yields today and inflation is a sign, I believe, of a market that has very low expectations for economic growth and a great deal of risk aversion. As the second chart above shows, inflation expectations have declined by almost 100 bps since early 2011, but actual inflation has risen. This is a market that worries about slow growth and a Fed that is powerless to push inflation up. I think the market is underestimating the Fed's ability to deliver 2% inflation, since core inflation is already running above 2%, and it has been 2% or better for most of the past decade. I fully expect the headline CPI to register at least 2% by the end of this year. Bonds are definitely expensive at these levels. 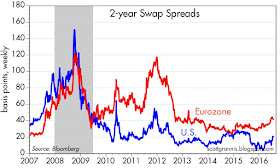 2-yr swaps spreads in the US have moved up a bit so far this year, but they are still in the comfort zone (15-35 bps) that is consistent with healthy, liquid markets and low systemic risk. I note that the increase in swap spreads from almost zero to today's 21 bps has coincided with a stronger equity market. That makes sense if you consider that buying swap spreads (equivalent to buying AA-rated bank bonds) is a more attractive way to hedge against a weaker economy than buying Treasury bonds, due to the onerous capital requirements imposed on bank balance sheets (i.e., going long swap spreads doesn't consume capital the way going long Treasuries does). In other words, very low swap spreads were indicative of a market that was desperate for ways to hedge against a weaker economy. That swap spreads are more normal today means the market is less risk-averse, and we see that as well in rising equity prices. 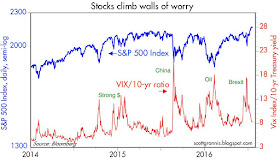 The chart above tells the same story. The ratio of the Vix index to the 10-yr Treasury yield is a measure of fear and pessimism. It has dropped in recent weeks as equity prices have risen. But the ratio remains elevated, thanks to extremely low Treasury yields. This means the market is less uncertain about the future, but not very optimistic about the prospects for growth (i.e., the Vix is relatively low and Treasury yields are extremely low). 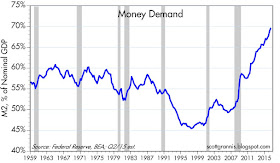 Arguably, the most significant macro development since 2008 is the huge increase in the world's demand for money, which is shown in the chart above. For decades the ratio of M2 to nominal GDP was relatively steady, but since 2008 it has soared to levels never seen before. This is indicative of a market that is still very risk averse, and it goes hand in hand with the significant deleveraging that has occurred in the private sector. 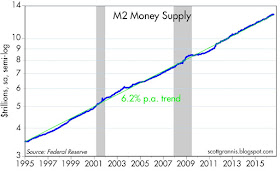 Even though M2 has grown much more than nominal GDP since 2008, the growth rate of M2 has been consistent with historical trends, as the chart above shows. There is no evidence here that the Fed has "printed" money in excess of what has been the historical norm. The Fed supplied more money to the system in response to a huge increase for the demand for money. There is nothing wrong with that! Without QE we would have been in a world of hurt: a shortage of money would have resulted in global deflation. 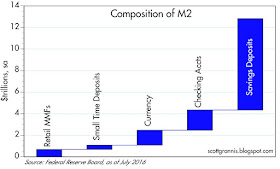 Bank savings deposits make up about two-thirds of the M2 measure of the money supply. Virtually all of the growth in M2 since 2008 is accounted for by bank savings deposits, and banks have "invested" most of that money in bank reserves (banks have lent almost $3 trillion to the Fed since the start of QE). Banks have been quite risk averse, and they have also had to deal with onerous capital requirements (e.g., Dodd Frank and Basel Accords). It's certainly possible that most or all of the increase in bank reserves was driven by much more stringent capital requirements. 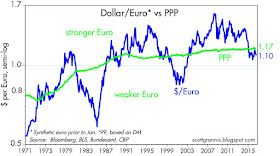 The euro has been relatively weak vis a vis the dollar since mid-2014, and Eurozone equities and Eurozone growth have significantly underperformed their US counterparts over that same period. The US hasn't been very exciting of late, but the Eurozone has been even less so. By my calculations, the Euro is trading a bit on the cheap side vis a vis the dollar. It's hard to get excited about the Eurozone these days, and that helps explain why the Brits were so anxious to leave its embrace.
Scott Grannis at 3:01 PM