The economic news is not worse than expected

Everyone realizes that the very weak GDP growth (-.5%) reported for last year's fourth quarter was an anomaly and not a harbinger of recession, the product of sharp defense cutbacks and an inventory slowdown. That's why stocks today are unchanged, and Treasury yields are actually up a bit. The Q4/12 news is old history, and growth is almost certainly going to be stronger in the current quarter, and that's what counts for now. 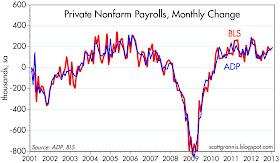 Today's ADP forecast of January private sector jobs growth was better than expected (192K vs. 165K), and as the chart above suggests, this points to Friday's private sector jobs gain to also be a bit better than the 169K expected. To be sure, job gains of 190K aren't anything to get excited about, but they are surely welcome, and this goes a long way to explaining why the market didn't take the GDP report as unexpectedly bad news. The economy is most likely still growing, albeit slowly. 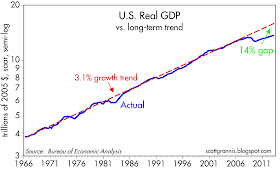 The economy's real problem is displayed in the chart above, which compares the path of actual GDP growth (blue line) to what the long-term trend has been (red). By my calculations, the U.S. economy is now about 14% below where it perhaps could have been if fiscal and monetary policies had been more growth-friendly (e.g., lower tax burdens, less government spending, reduced regulatory burdens) and less manipulative (e.g., no QE infinity, less income redistribution). That's a shortfall of $2.25 trillion, or about $7,000 of annual income per capita, or about $20,000 per family, and that is real money to most folks. It's taken the form of a very slow recovery in jobs; if this had been a normal recovery there could have been well over 10 million more jobs by now.

So even though the economy continues to grow, we are losing ground relative to where we should or could be. This is a national tragedy, but it's not a reason for financial markets to collapse.

10-yr Treasury yields are still only 2%, and 5-yr real TIPS yields are still firmly negative. As the chart above suggests, this implies that the market is braced for GDP growth to be miserable (as low as zero, possibly) over the next few years. With expectations like these, GDP growth of only 2-3% this year might actually turn out to be a positive surprise.

Today's FOMC announcement shows that the Fed shares the market's miserable expectations. Everyone, it seems, realizes that the U.S. economy is just not performing well, and there is little reason to expect any meaningful improvement for the foreseeable future.

If there is any silver lining to this cloud, it is the almost-universal agreement that we are stuck in a rut. When sentiment shifts so solidly to one extreme or another, the market becomes vulnerable to even the smallest sign that things are not conforming to expectations. When this might happen is anyone's guess, but I continue to believe that the economy is capable of exceeding the market's miserable expectations, which is why I remain invested in risk assets.

For all the glum news, it's not worse than the market expected, and that's good news.