Developments in China explain the end of gold's rise

Arguably, there have been three major developments in the global economy in the past decade: 1) the Chinese economy has posted 8-10% annual economic growth; 2) China's foreign exchange reserves have soared from $170 billion to $3.3 trillion; and 3) the price of gold has sextupled. It's likely that all three are related, and that the outlook for gold is diminished as a result. 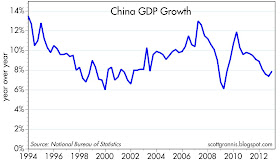 China's economic growth has been truly impressive. There has been huge progress and prosperity gains, thanks to the introduction of free market reforms and investment-friendly policy. 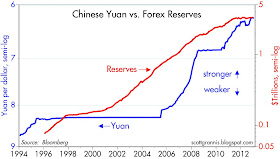 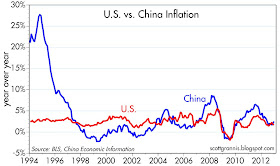 China's decision in early 1994 to peg the yuan to the dollar was a key factor driving China's growth, since it brought Chinese inflation rapidly down to the level of the U.S. The prospect of a stable currency not only reduced inflation and its multiple distortions, it also increased the market's confidence in China, and helped boost investment in the country since it all but eliminated foreign exchange risk. Indeed, since the yuan has only appreciated against the dollar since 1994, foreign investors benefited from strong Chinese growth and yuan gains. China was the boom of the century.

As the first of the two charts above shows, the huge capital inflows that helped China grow needed to be sterilized or accommodated by the Bank of China, otherwise they would have caused the yuan to soar, and that could have short-circuited China's ability to grow. Massive inflows of foreign capital seeking to benefit from rapid Chinese development essentially forced the BoC to buy over $3 trillion of foreign exchange, with a commensurate increase in the Chinese money supply. Converting capital inflows into yuan is the only way foreign capital could actually enter the economy, because you can't build a factory or hire workers with dollars—the dollars need to be converted to yuan, and it is the proper role of the BoC to buy those dollars and issue new yuan in the process. Yet despite massive forex purchases, which relieved pressure on the yuan to appreciate, the BoC still had to allow the yuan to float irregularly upwards. A stronger yuan helped to keep the inflationary pressures of rapid growth under control.

As I explained in this post, it now appears that this process of forex purchases and yuan appreciation is at an end. This is a big deal. China's foreign exchange reserves have not increased for almost two years, and the yuan has been stable against the dollar for the past two or three months. Capital flows and trade flows appear to have reached some kind of equilibrium, just as Chinese and U.S. inflation have converged. 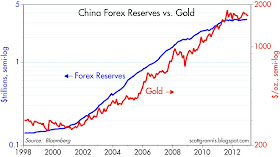 I find the above chart fascinating. It compares the rise in China's forex reserves with the rise in the dollar price of gold, both of which have been impressive to say the least. China's central bank started buying up capital inflows in earnest in early 2001, right about the time that gold was hitting a multi-year low. This came to an end in early 2011, as net capital inflows approached zero, and shortly thereafter gold peaked. Both forex purchases and the price of gold increased by many orders of magnitude over roughly the same period.

Is there a plausible explanation for the strong correlation between these disparate variables? I think there is, but I can't say so with authority.

Gold bugs (and some supply-siders) will argue that gold rose because both the Fed and the BoC were "printing money" with abandon. The global monetary base exploded during this period, so naturally gold rose—because the world was being flooded with fiat currency. Gold was the only port in an eventual inflationary storm.

But we know that Chinese and U.S. inflation rates are still relatively low. There has been over a decade of impressive expansion of bank reserves and yuan, but inflation has so far failed to show up—outside of some impressive strength in commodity prices.

Don Luskin, a good friend, got me started down the path to an explanation for how China's forex reserves are connected to the rise in the price of gold. He argues that the outstanding stock of gold is relatively fixed—growing only about 3% per year—but that the demand for gold has jumped by orders of magnitude since China, India, and other emerging markets have enjoyed explosive growth and prosperity gains. In other words, the number of potential buyers of gold has risen much faster than the supply of gold, so naturally gold's price has increased. This is not a story about massive money printing and hyper-inflationary consequences, it is a story about a one-time surge in the demand for the limited supply of gold.

And that surge in demand for gold stopped almost two years ago as China's capital inflows have settled down to more manageable levels. Since capital is no longer flooding into China, China's growth rate is subsiding. Instead of purchasing massive amounts of foreign exchange reserves, China will in the future be purchasing more goods and services from the rest of the world as its economy continues to expand. This is "organic" growth, not super-charged, foreign investment-led growth. 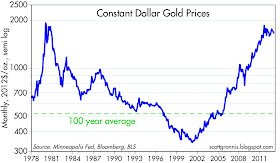 Meanwhile, as the chart above shows, gold prices in real terms have reached very high levels. Should it be surprising that demand for gold is no longer accelerating now that its price has reached historically high levels relative to other goods and services? Gold is very expensive relative to other things at today's prices. Demand has its limits. At the same time, the very high price of gold is undoubtedly stimulating all kinds of efforts to increase gold production, thus bringing supply and demand into balance. As we approach two years of relatively stable gold prices, it is reasonable to conclude that the heydays of gold are now a thing of the past.

To sum up, the slowdown in Chinese growth and the end to China's massive forex purchases are good signs that the boom in gold is over.
Scott Grannis at 9:47 PM