The Fed screwed up badly

In the comments section of an earlier post (http://scottgrannis.blogspot.com/2018/12/clouds-and-silver-linings.html), I said:

The interaction of the Fed and the market is a complicated dance, where one leads the other and vice versa. The bond market has been telling the Fed to back off on its plans for higher rates, and I think the Fed has been getting this message. At the same time the Fed has been trying to reassure the market that it has confidence in the economy and the outlook for inflation, but that at the same time it is not willing to do anything rash.

To extend this analogy to the disastrous market reaction to yesterday's FOMC announcement and Powell's subsequent comments, I would say I made the mistake of believing the Fed knew how to do this dance. Unfortunately, the Fed seems to be dancing with two left feet, and has in the process severely injured the feet of its dancing partner, the market. The Fed did not take the bond market's advice to back off on its tightening agenda. The Fed ignored the obvious signs of angst that are playing out around the globe, and it ignored the evidence pointing to declining inflation and declining inflation expectations. A pause was called for and warranted; instead the Fed preferred to tighten and to project a further two tightenings next year, in spite of the fact that the market was not prepared for any further tightenings. And on top of that, Powell said that the unwinding of the Fed's balance sheet was on "auto-pilot," as if nothing could go wrong in the interim.

To make matters worse, former NY Fed Chief Bill Dudley spoke to Bloomberg this morning and essentially seconded everything Powell said yesterday, i.e., the Fed was right to hike rates and there is every reason to think that more hikes are warranted.

In short, the Fed now has convinced the market that it is more likely than not to over-tighten policy, and that, in turn, raises the spectre of another Fed-induced recession. (Very tight monetary policy is directly responsible for every recession in modern times, as I've repeatedly noted in this blog.)

If the Fed does not reverse course or otherwise clarify its intent, soften its stance, or display more concern for the market's angst, then the chances of a recession will increase significantly. It's hard to believe that Powell would insist on snatching defeat from the jaws of victory, but that's the message he has inadvertantly sent the market.

There is still plenty of time for Powell to set things straight, because the key financial market and economic fundamentals are still intact. But in the meantime things are likely to get uglier. 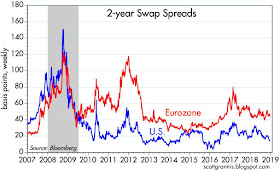 Chart #1 shows what in my opinion is one of the most important financial indicators of all: 2-yr swap spreads. These have been excellent leading and coincident indicators of liquidity, systemic risk, and economic health. At current levels (~15 bps), swap spreads are exactly where you would expect them to be in a normal, healthy world. Eurozone swap spreads are on the high end of normal, however, but we know the Eurozone economy is struggling, and possibly flirting with another recession, if recent guidance from Fedex is a guide. As I mentioned yesterday, the US economy appears strong, and swap spreads support that view. They say that systemic risk is low, liquidity is abundant, and the financial and economic fundamentals are healthy. You couldn't ask for anything more. 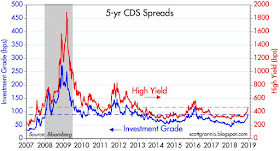 Unfortunately, Chart #2 shows that Credit Default Swap spreads are somewhat elevated. I think the main reason for this can be traced to the huge and recent decline in oil prices: it's a replay in a sense of what happened in late 2015, when collapsing oil prices created tremendous pressure on the bonds of energy-related companies. We can't rule out the negative impact of Fed tightening, but for now the main driver of wider spreads seems to be falling oil prices. That can be very painful for oil producers and related industries, but we survived worse just a few years ago, when oil prices truly plunged, from $110/bbl to a mere $30. More recently, the drop has been from a high of $75 to $46. 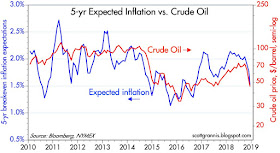 Chart #3 compares the price of crude oil to the market's expectation for what the CPI will average over the next 5 years. Inflation expectations have fallen in direct proportion to the decline in oil prices, much as they did in late 2015. Inflation expectations are down mostly due to cheaper energy, and not, as one might fear, to the Fed being too tight. If the Fed were really squeezing market liquidity, 2-yr swap spreads would be high and rising.

Chart #4 compares the value of the dollar (inverted) to the level of industrial metals prices. There is a strong tendency for commodity prices to be inversely correlated to the value of the dollar, and that is easy to see during the period 1997-2014. More recently, from 2015 thru 2018, the correlation has declined significantly, as a much stronger dollar has resulted in only a modest decline in metals prices. I think this shows that the dollar is not "too strong," and that in turn implies that the Fed has not been too tight. If the Fed were intent on creating a shortage of dollars in order to slow the economy, the dollar would be much stronger and/or commodity prices would be much weaker. 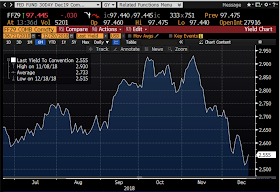 Chart #5 shows the market's projection over the past six months of what it thinks the Fed's target funds rate will average in December 2019. Of note is the huge decline beginning last month, from 2.93% to 2.55% today. This is completely at odds with the Fed's current expectation, as announced by Powell yesterday, that the funds rate will be 3% by the end of next year (i.e., two more tightenings in 2019). This is the market's way of telling the Fed that it is on course to over-tighten and thus risk a big economic slowdown or even a recession. You don't need an inverted yield curve (which is still modestly positive) to know that the market is worried about the Fed and the economy. This chart tells you all you need to know. If yesterday Powell had announced a pause and conditioned future tightening to the health of the economy and the state of global markets (e.g., trade tensions) the market would have reacted positively instead of negatively. 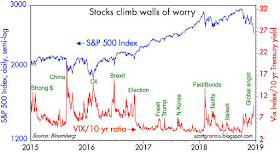 As Chart #6 shows, there is blood in the streets. Fear and uncertainty are surging, and the stock market has plunged almost 16% from its all-time high of last September. At this rate we're likely to see more blood unless and until Powell walks back yesterday's comments. We're not yet in a full-blown panic.

On the positive side, all it takes is a few words to put things right. The damage done to date is not significant or permanent, and it is reversible.
Scott Grannis at 2:13 PM